Tutorials → How to Build Apps

Let's look at our next requirement:

Our app currently works well on a smartphone, but if we'll be deploying it on tablets, we can make better use of the screen real estate.

Any JourneyApps application can be used on either a smartphone or a tablet, and it will automatically adapt itself to fit the particular device. In addition, different sizes and screen resolutions across smartphones and tablets are also supported by JourneyApps.

JourneyApps does however offer some special functionality aimed at making better use of the available real estate on tablets. When you implement these tablet features and link your app to a smartphone, the app will still work on the smartphone and the UI features will "gracefully degrade" to match the smaller screen, as you'll see later in the tutorial.

These components are shown below in a hypothetical example app: 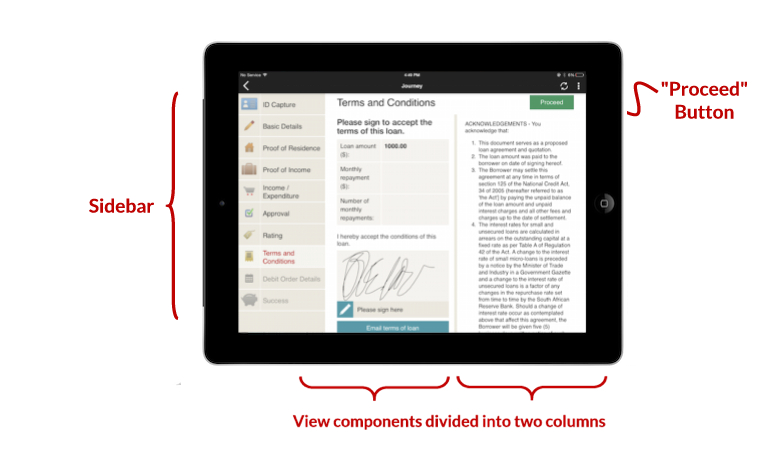 The example app in the screenshot above involves a person being signed up for a loan. We use the sidebar to show all the steps in the sign-up process that need to be completed, and the "Proceed" button is used at the top right of each screen to allow the user to move through the process easily. Columns are used to better organize information, for example on the above screen we're showing Terms & Conditions on the right while allowing the user to sign to accept the terms on the left.

Link Tablet as a Test Device

We'll now be making some changes to our Snag List app to optimize it for a tablet. The first step is to link a tablet as a test device of the Snag List app. If you don't have a tablet, you could perhaps skim through this section of the tutorial, or still make the changes even though they won't reflect when testing with a smartphone.

If you go to the Test tab of the Snag List app, it shows that a test device is already linked to the app. You can take your tablet and scan the barcode shown under Scan Barcode to Re-Link Your App. Note that this will cause your previous test device to be unlinked from your Snag List app (JourneyApps only allows one active test device per App Editor user at a given time). 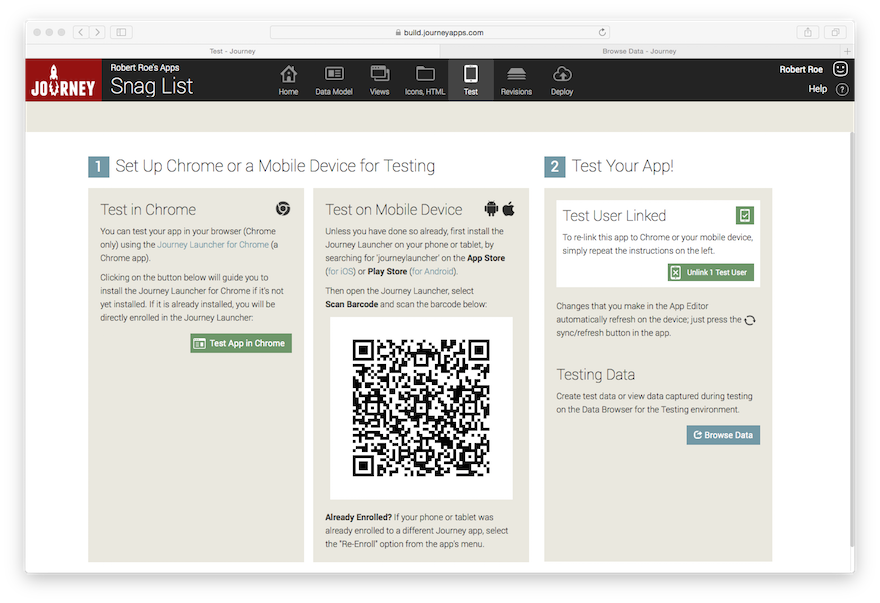 Now let's head back to the View XML for our Main View. Under "Components go here"   type columns and auto-complete, which should give you this:

Now let's cut and paste our existing components into the columns, and also add another heading and info text:

In this case, we've moved all our components into the columns. However, note that it is also possible have some components outside the columns (above or below the <columns> tag), in which case those components will span the full width of the screen as usual.

Refresh and test the app on the tablet. It should look like the below if you are using a 10-inch tablet (if you are using a smaller tablet, the columns might be stacked as you'll see later in the Form Factors section of the tutorial). 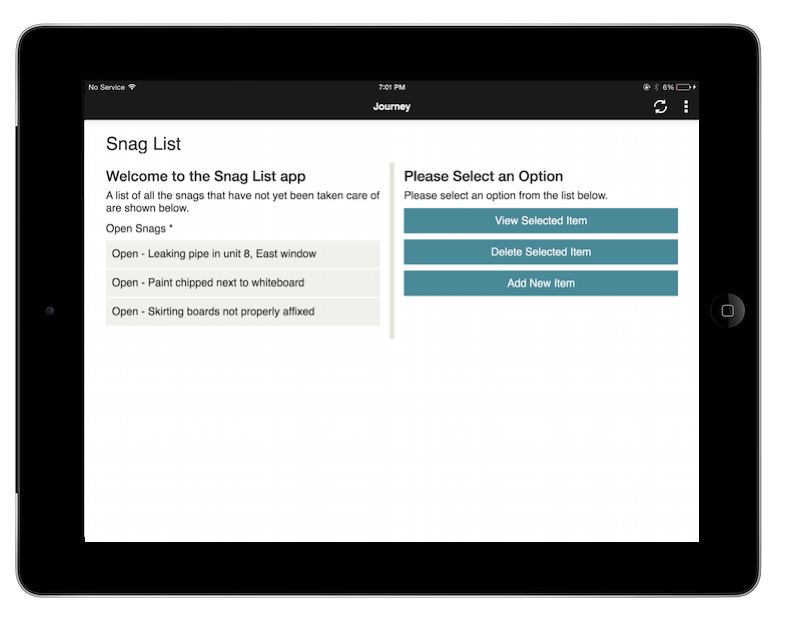 This will result in the following on the tablet: 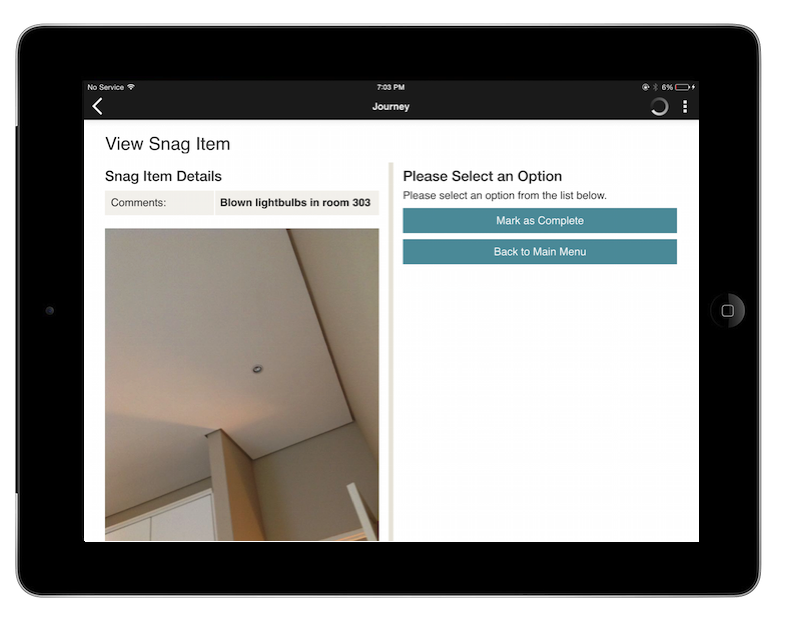 Let's refactor the components in our "Add New Item" view with columns too, and also change our "Save Item" button to a "Proceed" Button. Note that to create a "Proceed" Button, we place the button outside of the <columns /> and add id="proceed" to it:

This should look like the following on the tablet: 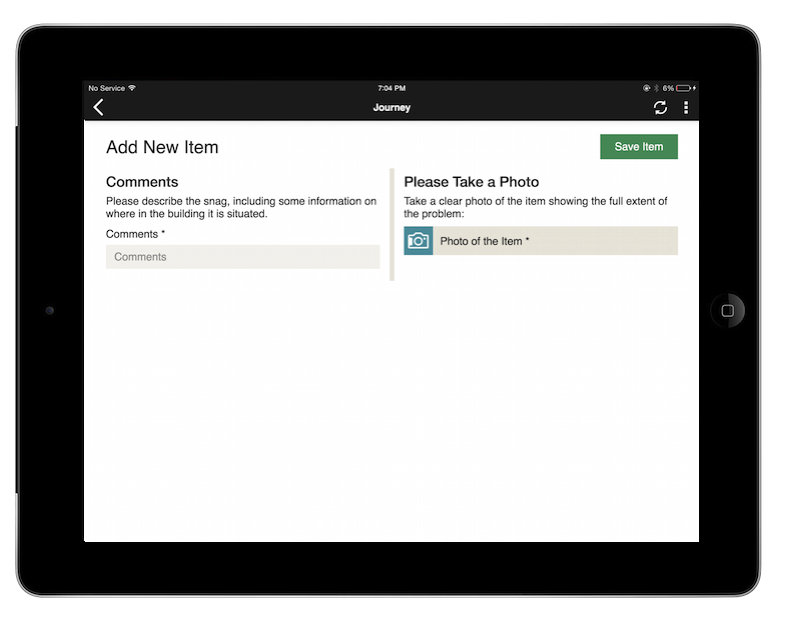 We'll also be adding a sidebar to our app, but since sidebars are most often used in conjunction with icons, we'll wait until the next section which shows how to use icons before adding the sidebar.

Now head over to Section 14 of the tutorial: Menus and Icons
Previous Section Next Section