This tutorial provides a high-level overview of what JourneyApps is and its methodology for building apps.

In essence, JourneyApps is a cloud-based technology platform to build and run custom enterprise mobile apps.

JourneyApps is for Internal Business Apps

JourneyApps is intended for building enterprise apps for your workforce — sometimes also called Business-to-Employee (B2E) apps. This is ideal for giving your employees access to business processes on their mobile devices. JourneyApps was designed from the ground up to be the fastest platform for building these kinds of apps.

JourneyApps is therefore a very focused platform. By virtue of its capabilities and functioning, it is not aimed at building mass market or consumer mobile applications. If you intend to build apps for a wide audience outside of your organization (for example, your customers), JourneyApps might not be a good fit for your requirements.

Everything that you do with JourneyApps happens online, in your browser: There is no software to install, no IDE to configure, no device connectivity setup to perform. To develop apps, you link a device to our online App Editor by scanning a barcode, and then all changes that you make to your app is pushed to the device via the cloud.

JourneyApps consists of the following components: (refer to the diagram below)

Keeping in mind that JourneyApps is used both for developing and deploying/running apps: It is necessary to keep your real-world or live data and users separate from the data and users that you use for testing purposes during the development process. For this purpose, JourneyApps provides 3 different environments of the App Back-end:

A major part of the power of JourneyApps lies in its global automatic data synchronization capability, which is the way that apps work by default. What this means is: 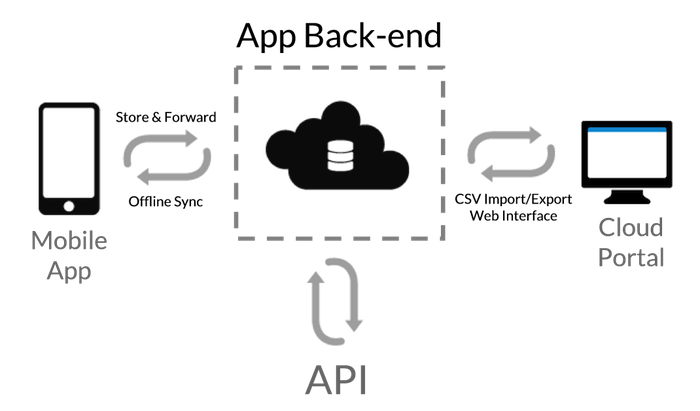 Apps Can Be Used Offline by Default

Because of the features described above, JourneyApps apps can be used fully offline by default.

An App Consists of a Data Model and Views

Building an app on JourneyApps involves the customization of two kinds of things:

Refer to the How to Build Apps tutorial for an in-depth technical guide on how to build apps.

The JourneyApps Approach to Building Apps

The diagram below shows a typical high-level approach of how you would build an app on JourneyApps. This approach is very similar to a standard software development methodology, however, take note of the following key differences with JourneyApps:

It is recommended that you read the How to Build Apps tutorial next for an in-depth technical guide on how to build apps.