Tutorials → How to Build Apps

The best place to start when using any new tool is to create a "Hello World" app — the simplest possible app that you can create. Let's do that right now.

Hit the + (New App) button in the App Editor as shown:

Enter a name for the app and hit Create App: 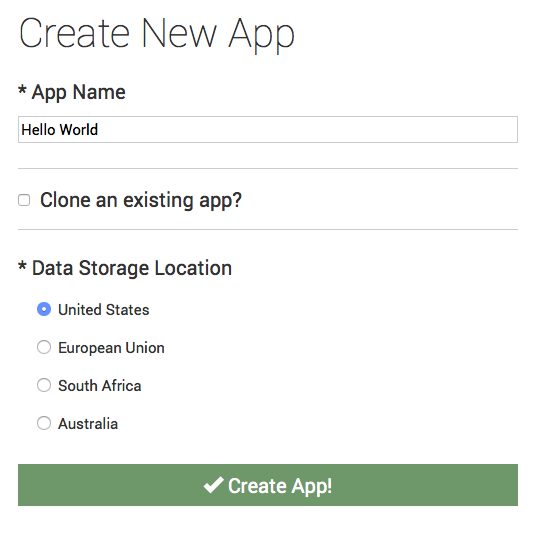 You should now see the following: 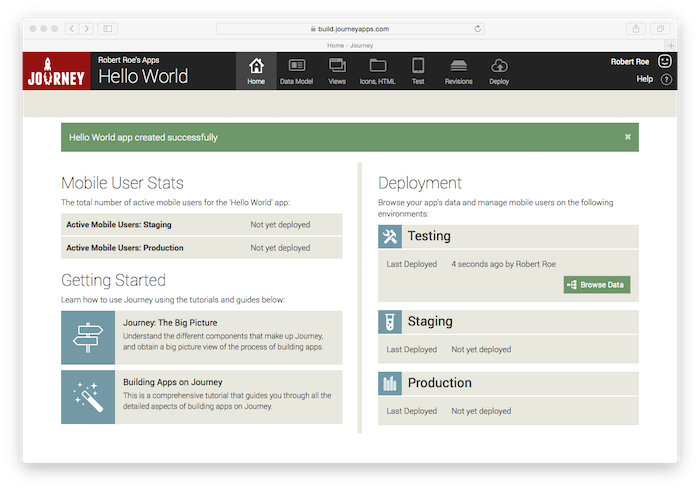 An App Consists of a Data Model and Views

As you've seen in the JourneyApps: The Big Picture tutorial, building an app on JourneyApps involves the customization of two kinds of things:

In your Hello World app, you can see that the Data Model and Views tabs on the menu allow you to customize these things for your app. 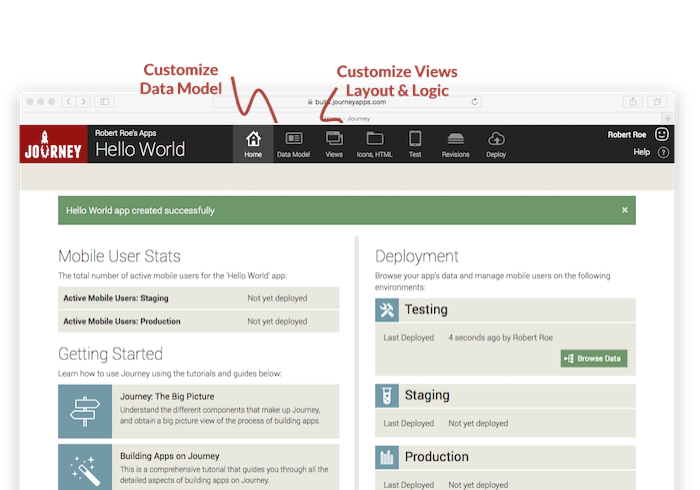 Testing Your App: Link a Mobile Device or Use Chrome

An important concept in JourneyApps is that you should test your app continuously while you are building it. Therefore, immediately go to the Test tab of your Hello World app and follow the instructions to either:

What Kind of Mobile Device? If you're using a mobile device, you can use either an Android or iOS smartphone or tablet for developing apps in JourneyApps — guidelines on recommended devices can be found here. During this tutorial, we will initially optimize our apps for a smartphone, and then later show you how to optimize it for a tablet. 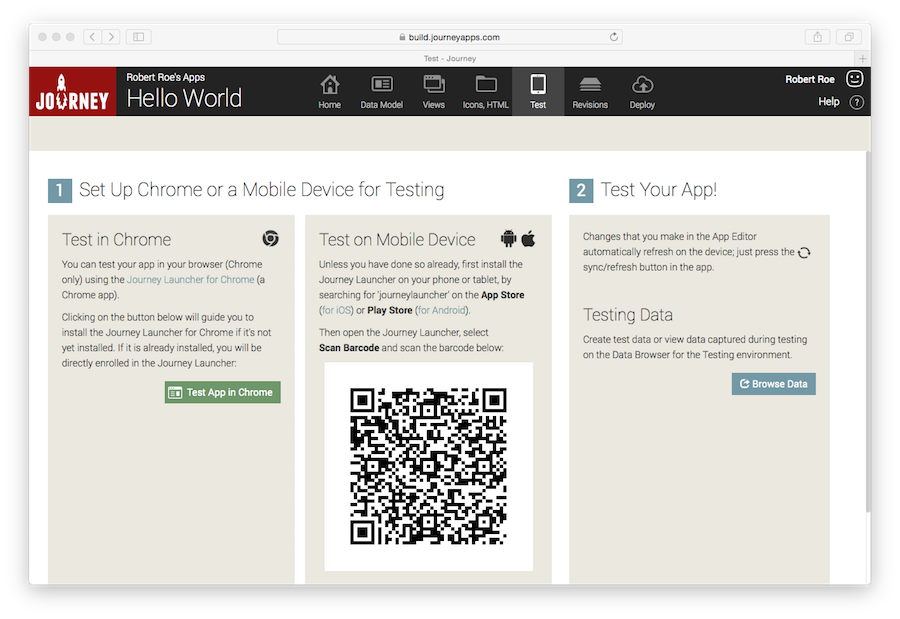 Container App + Over-the-Air Customizations: As you've seen in the JourneyApps: The Big Picture tutorial, the JourneyApps Container that you install from the Play Store / App Store / Chrome Web Store  is simply an empty generic container. Once you link your mobile device (or Chrome), your app customizations are deployed to it over-the-air, and your app is dynamically rendered. This means that deploying new versions of your app to users is extremely easy and happens in an automated way.

The app should now look like the following on your mobile device (the screenshots in this tutorial depict an iOS device, and the app will look very similar if you are using an Android device or Chrome). As you can see, you start with a blank clean slate: 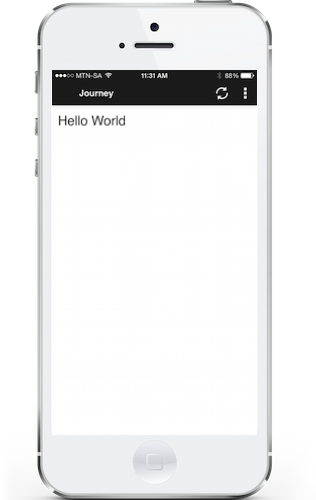 Now click on the Views tab for the Hello World app in the App Editor. What you see here is a visualization of the "flow" of your app — in other words, all the screens in your mobile app, and how they tie together. Right now, there is only a single "Hello World" view, with "main" shown underneath it: 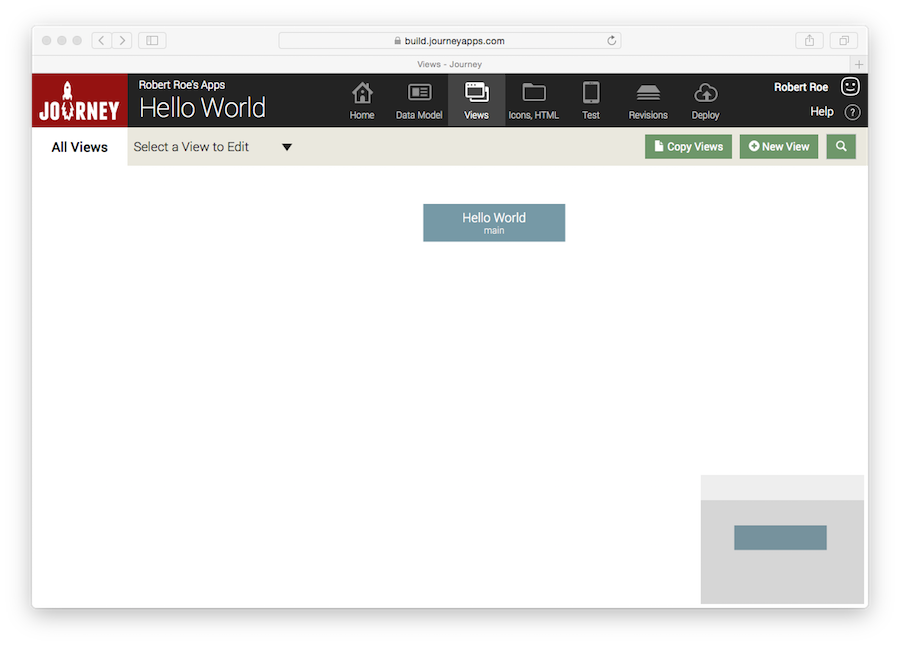 You can now click on the Hello World Main View. You should see the following, which allows you to edit: 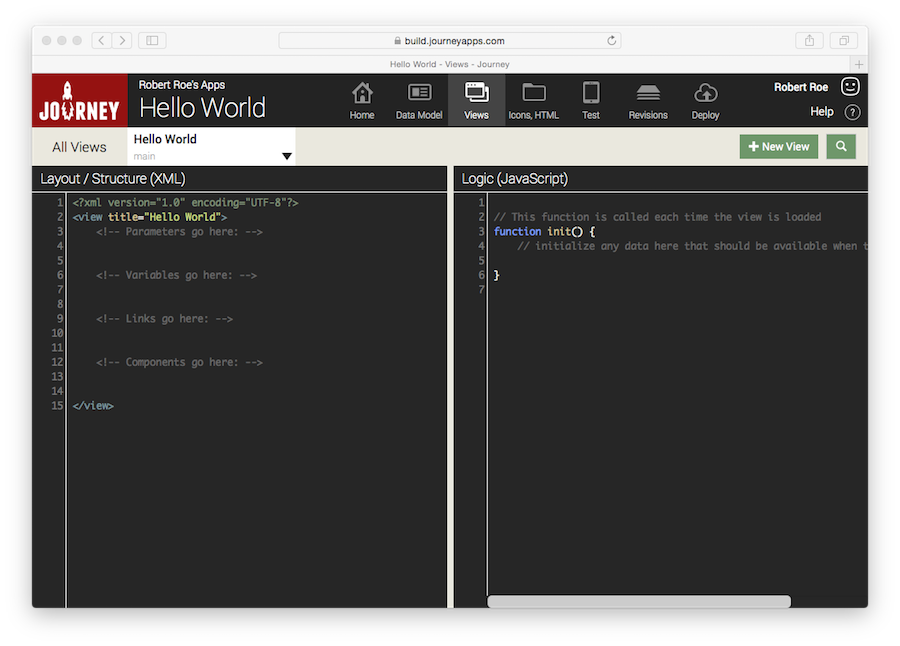 The visualization of the "flow" of your app seen in the previous picture is automatically generated based on the XML code of all your views. We'll cover this in more detail later in the tutorial.

Now head over to Section 3 of the tutorial: Hello World
Previous Section Next Section